‘Nobody loves me’: Quantification and context 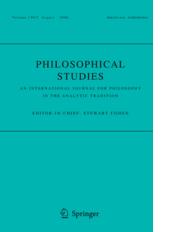 In my paper, I present two competing perspectives on the problem of quantifier domain restriction – the objective perspective on context (OPC) and the intentional perspective on context (IPC). My goal is to offer a plausible and fair reconstruction of IPC, against standard objections to the OPC. According to OPC, the relevant domain for a quantified sentence is determined by objective facts of the context of utterance. In contrast, according to IPC, we must consider certain features of the speaker’s intention in order to determine the proposition expressed. Drawing a parallel between quantifier domain restriction and demonstrative reference, I argue that the speaker’s intentions can play a semantic role only if they satisfy an Availability Constraint: an intention must be made available or communicated to the addressee, and for that purpose the speaker can exploit any feature of the objective context (words, gestures, relevance or uniqueness of either the quantificational domain or of the referent in the context of utterance). In the end, I claim that IPC is committed to saying that elements of the intentional context can be identified only through the identification of elements of the objective context.