Lakatos between the Hegelian devil and the Popperian deep blue sea 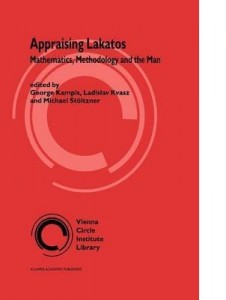 When Lakatos unexpectedly died in February 1974, Paul Feyerabend was invited to write an appreciation of his friend for the British Journal for the Philosophy of Science. He portrayed Lakatos as “a fascinating person, an outstanding thinker and the best philosopher of science of this strange and uncomfortable century”; as “a rationalist, for he thought that man had the duty of using reason in his private affairs as well as in any enquiry concerning the relation between himself, nature, and his fellow men”; and as “an optimist, for he thought that reason was capable of solving most of the problems arising in the course of such an inquiry” (Feyerabend, 1975b, p. 1). Just a few years before Feyerabend had claimed, in a rather different style, that his fellow was a “big bastard – a Pop-Hegelian philosopher born from a Popperian father and an Hegelian mother” (“Lakatos-Feyerabend Correspondence,” forthcoming in Motterlini, ed., 1999).’ In fact, some of Lakatos’ most fruitful contributions such as his dialectical conception of mathematical heuristic, the idea of rational reconstruction and, more generally, the emphasis on the role of criticism in the progress of knowledge come directly from a peculiar philosophical conflation of Hegelian and Popperian ideas. I shall argue, however, that for the same reason, an tension in Lakatos’ thought cannot be ultimately resolved. Like a seaman in the famous pirates’ ballad caught “between the devil and the deep blue sea,” that is between his captain who held near-dictatorial powers on the one side, and the dangerous boundless forces of nature on the other,2 Lakatos too was caught between the devil of Hegelian historicism and the deep blue sea of Popperian fallibilism. I shall provide an analysis of the roots and objectives of Lakatos’ philosophical programme especially in the light of the material in the Archive of Professor Imre Lakatos at the British Library at the London School of Economics for Political and Economic Science (henceforth Archive).3 Instead of giving a complete description of the available material, I shall emphasise those items which illustrate most clearly Lakatos’ method of “Proofs and Refutations,” his revision of Popper’s falsificationist approach, the shift that occurred in the conception of methodology from his early writings to his later papers, his criticism of the neoauthoritarian philosophies such as Toulmin’s, and finally his struggle to defend “Reason” against Feyerabend’s neo-sceptical challenge.