The raising of predicates 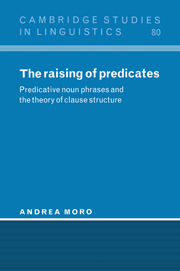 One of the basic premises of the theory of syntax is that clause structures can be minimally identified as containing a verb phrase, playing the role of predicate, and a noun phrase, playing the role of subject. In this study Andrea Moro identifies a new category of copular sentences, namely inverse copular sentences, where the predicative noun phrase occupies the position that is canonically reserved for subjects. In the process, he sheds new light on such classical issues as the distribution and nature of expletives, locality theory and cliticization phenomena.