Climate change and individual decision making: An examination of knowledge, risk perception, self-interest and their interplay 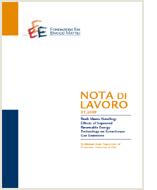 In this essay, three separate yet interconnected components of pro-environmental decision making are considered: (a) knowledge, in the form of basic scientific understanding and procedural knowledge, (b) risk perception, as it relates to an individual’s direct experience of climate change and (c) self-interest, either monetary or status-driven. Drawing on a variety of sources in public policy, psychology, and economics, I examine the role of these concepts in inducing or discouraging pro-environmental behavior. Past researches have often overemphasized the weight of just one of those variables in the decision making. I argue, instead, that none of them alone is capable of bringing about the behavioral change required by the environmental crisis.  Evidence shows that increasing the public’s scientific knowledge of climate change cannot unilaterally bring about a strong behavioral change. The same can be noticed even when knowledge is joined by risk-perception: deep psychological mechanisms may steer people towards inaction and apathy, despite their direct experience of the detrimental effects of climate change on their lives. Focusing on self-interest alone is similarly unable to induce pro-environmental behavior, due to a host of psychological factors. Instead, in all of the above cases an important missing ingredient may be found in providing the public with locally contextualized procedural knowledge in order to translate its knowledge and concern into action. The importance of this kind of practical knowledge has solid empirical and theoretical underpinnings, and is often overlooked in the climate-change debate that tends to focus on more high-level issues. Yet, for all its essential simplicity, it may carry important public-policy implications.